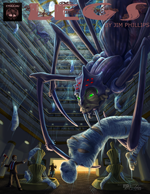 Legs is a modern-day Scenario for 4 to 6 Investigators which can usually be run in a single gaming session. The Investigators should already know one-another. Feel free to use the pre-generated Characters included, or have Players create their own characters. Given the nature of this Scenario, experienced Players may find it enjoyable to create themselves as Characters but this is in no way required. Keepers should feel free to adapt the location or other details of the Scenario as desired.

The Investigators have come to Chicago, Illinois to attend a three-day convention in celebration of their favorite weird-fiction author, Harrison Paul Likenstuff. The convention is being held in the Winding Hotel, a large somewhat upscale business hotel located near O’Hare International Airport in Chicago. The weekend consists of sessions discussing Likenstuff’s work, games based on the characters and monsters created by Likenstuff in his stories, and the highlight of the convention is a film festival of fan-created shorts inspired by Likestuff’s work.

After two full days of a fun and exciting convention, the Investigators will attend the screening of a highly-anticipated fan film called Legs. But what has been a harmless and enjoyable weekend getaway quickly turns into a terrifying race to survive.

The original playtest for Legs is available in audio format here.

Legs is available in the Miskatonic Repository as a free PDF download.

Just like to say thanks for putting this out.

My pleasure, hope you enjoy it!

Thanks for the free download of your written adventure.

I am a player, DM, writer, and once the Writing Director for the Luruar Region in the LFR Campaign.

I have been listening to your podcasts, as you can see by my comments, and with now an adventure to read and then look at while the podcast is being played, I am interested to see how it is run.

I have looked over several adventures and comparing it to the D&D format, it looks very confusing; more like an ad lib kind of play; just giving you the gist of what is going on and then go and improv on it.

Looking forward to listening to this.

Definitely agree that a good investigation-type scenario - whether CoC or any other game - is a far difference beast that the typical D&D dungeon crawl. There are plenty of CoC scenarios which are certainly quite linear, but I've never found them nearly as interesting to play. The open 'sandbox' I think requires a different mindset for the GM, as you have to just respond to the direction the Players want to go rather than just leading them around by the nose.

Keep in mind though that our audio of this Scenario was the original play test - long before the Scenario was actually written. Shannon ran a game of the written Scenario a few months back, I think the audio for that is available over at MuP.